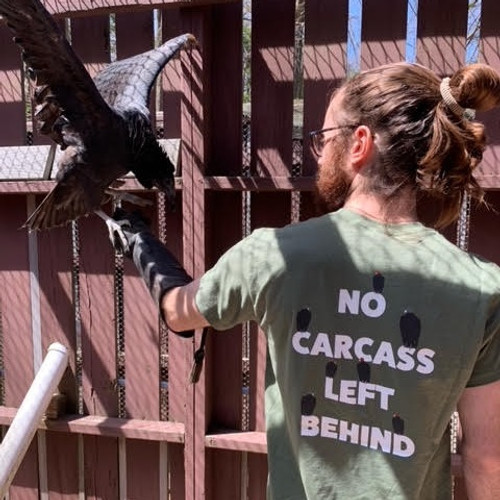 Celebrate one of nature's most important clean-up crew, the Vulture! This popular tee is 100% cotton, sizes S-3XL, and available in Steel Blue or Military Green. This tee features both a Black vulture and Turkey vulture in the design.

The turkey vulture is the most widely distributed, as well as the most abundant, of all scavenging birds of prey. The species, which occurs only in the New World, can be seen as far north as southern Canada and as far south as Tierra del Fuego at the southern tip of South America. Turkey vultures are considered partial migrants; northerly populations of the species migrate, whereas southern populations, in general, do not.  Millions of migrating turkey vultures have been counted annually at migration watch sites in Mexico, Costa Rica, and Panama.  However, despite their abundance, little is known about their short- and long-distance migratory movements.